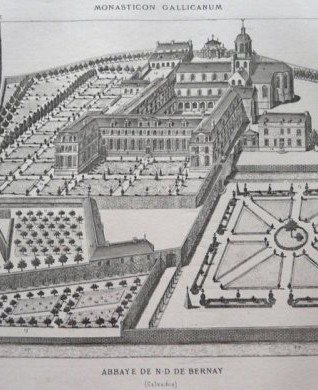 DID YOU KNOW?
Before the Conquest of England numerous grand Abbey constructions were carried out in Normandy: it was a consistent policy of the dukes of Normandy then the Kings of England.
WHY IS IT IMPORTANT
Bernay shows that Norman architecture obtained many influences from Bourgogne.

The abbey to which the church belongs was created in the first decade of the XIth century by Judith of Brittany wife of Duke Richard II (996-1026). Richard II entrusted the completion of the church to the Italian abbot Guillaume de Volpiano († 1028), reformer of the monastery of Fécamp to where he had been called in 1001. The works were completed by the first abbot, Vital de Creully (named around 1060, † 1082), to whom this achievement would merit the considerable privilege of becoming the Abbot of Westminster in 1076.

The construction works date mostly from the three first quarters of the 11th century. Despite the destruction of the Romanesque façade and the apse, the church still presents itself as the prototype where, for the first time, the characteristics of Romanesque Anglo-Norman architecture are employed. For example: an apse with a phased plan, of the Benedictine type (instead of the ambulatory or the simple flat apse (chevet), unique around 1020 in Normandy and the model; taken up later by the abbeys in Caen; had undoubtedly been brought back from Bourgogne; composite columns, appeared in the same period, around 1030, in Auxerre, Nevers and Saint-Benoît-sur-Loire and a passage within the thick wall, at the upper level of the Eastern wall of the transept, influenced by Sainte-Bénigne de Dijon.

The decoration is still very abundant, varied and of good quality. Three sculptor workshops can be singled out: the one using sources in art of the Rhône Valley and Bourgogne (capitals with palm leaves and interlacing decorating the bays of the second level of the choir and the transept; bases with interlacing), a second Ottonian inspiration (refined vegetation and animal decorations on truncated baskets on a ledge) and a third, in the nave (Corinthian derived baskets).  These influences from Bourgogne and their diffusion illustrate the capacity of the dukes of Normandy to attract the elite of the ecclesiastical reformers and to entrust them with large construction sites such as the Italian Guillaume de Volpiano, prior to Lanfranc and Anselme of the following generation. These influences are also those of the Germanic empire, whose vast cathedrals and abbey churches inspire the Norman programmes on the continent and in the British Isles.