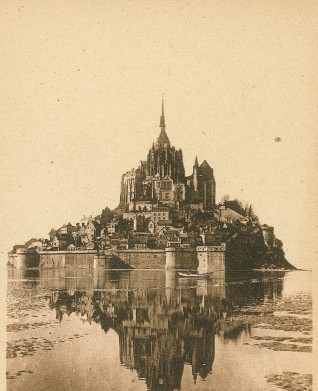 DID YOU KNOW?
In the territories dominated by the Normans in the XIIth century, there exists three shrines of Saint Michael, connected to each other by the pilgrimage routes: the most ancient is in Southern Italy (Pouilles) at the Mont San Angelo (Mont-Gargan), whereas the Mont-Saint-Michel is reproduced almost like an imitation at St Michael’s Mount in Cornwall.
WHY IT IS IMPORTANT
The Mont-Saint-Michel is the most ancient and the most significant place of pilgrimage in Normandy. After it, comes the pilgrimage on the tomb of Thomas Becket in Canterbury, the second in importance in the Anglo-Norman sphere in the XIIth century.

​In 708, the Archangel Saint Michael appeared to Saint Aubert Bishop of Avranches and commanded him to build a sanctuary on the ‘Mont Tombe’ where the archangel fought the Devil. The victor over evil, it is also Michael who weighs the souls at the Final Judgement. His sanctuary rapidly became a major site of pilgrimage where men came to seek comfort for a good death.The sanctuary has therefore become a renowned site, protected by Charlemagne but also pillaged by the Vikings in 847. Rollon the First (911-927), then his son William Longsword (927-942), understood the spiritual importance of the site and rapidly restored and provided it with the monastery. From this moment on, the Norman dynasty would heavily rely on the prestige of the Abbey and the Norman knights would commend themselves to the protection of the Archangel who was also the captain of the celestial hosts.

In 965, Duke Richard I favours the installation of the Benedictine monks, architects of the new Abbey. On the mount, the physical constraints of the site imposed the construction of classical abbey buildings in superimposed levels, the church crowning the pyramid.  In the present building we especially admire “La Merveille” (The Marvel) (the abbey buildings) of the beginning of the 13th century and the Gothic choir.  Yet the nave of the abbey church shows a very beautiful example of the elevation on three levels of the Romanesque period and the Saint-Martin crypt or the church of Notre-Dame-sous-Terre are examples of the architecture of the time of the first dukes (10th century).  The Gothic cloister, where the columns of Purbeck marble (Dorset) support decoration in Caen Stone, expresses the richness and the prestige of the sanctuary that will continue to attract pilgrims from Normandy, England and from all over Europe. The scriptorium of the ‘Mont’ was, from the age of the dukes of Normandy, one of the richest and most important Western libraries