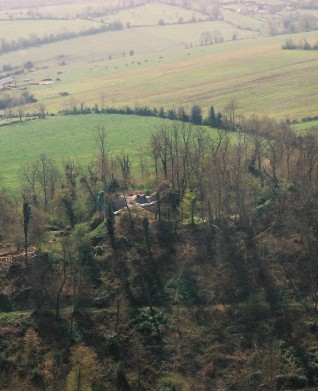 WHY IS IT IMPORTANT
The Château Ganne shows the example of the organisation of the control of the land in the Normandy of the XIIth century.
DID YOU KNOW?
Abandoned to ruin, the memory of the Château Pommeraye has survived in the legends associated with the 'Chanson de Roland', linking it with the character of the traitor Ganelon from where Château Ganne takes its name

The Château of Ganne, in the municipality of Pommeraye (Calvados) is located in the small undulating forestry region of Cinglais, to the south of the Plaine de Caen and to the west of the region of Falaise where forty or so fortifications, outer walls, castle mounds and stone châteaux were identified by the archaeology. The density of this landscape of seigniorial residences accompanied by other evidence of the development of the medieval economy, attests to the promotion and development of this land under the dukes of Normandy.

The first seigneur of Pommeraye, Raoul (died c. 1102) accompanied William the Conqueror to Hastings and obtained enough resources to organise his Norman domain and to produce an English branch of the lineage, Berry Pomeroy. Henry, grandson of Raoul was supreme commander of the French armies for Henry I Beauclerc and married one of the illegitimate daughters of the Duke-King.  Under the Plantagenets, the Château passes directly into the hands of the King of England.  The eldest branch of the family took sides against the King of France in 1204 the heritage of the French branch is then dispersed in the 13th century.

Recent archaeological digs have allowed a better understanding of the organisation of this type of châteaux, essential links in the seigniorial command in Normandy, as well as in England. It consists of a group three selected outer walls whose ramparts take advantage of the hilly area for the fortification dominating and controlling the road and the surrounding countryside.  The poultry yard stretches to the foot of the hilly area. The main courtyard accommodates a large residential building of the single storey hall type, supported by the curtain wall, and at least one large domestic building in stone with oven and well. A chapel, whose sculptures and painted decorations attest a certain level of wealth, accommodates baptismal fonts that played a role in the organisation of a parish.  The high court, often confused with a ‘motte’ (mound), is in fact a ‘donjon annulaire’ of the type ‘donjon-coquille’ (i.e. a shell-keep:  narrow built enclosure on top of a talus and deep moats).  At its entrance, the entrance tower, the vestiges of which have survived to our day was a long (23 m x 7.5 m) and high vaulted gallery above a floor whose ruins hav reemained visible in a landscape overgrown by woods.