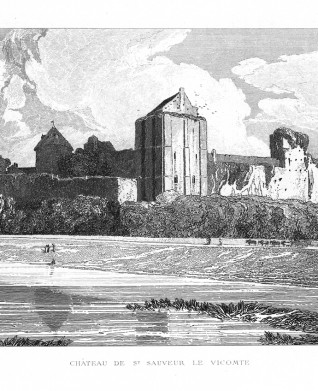 Saint-Sauveur-le-Vicomte in the 11th century was the seat of the Viscount de Cotentin, given to the Néel family, founders of the Benedictine Abbey of Saint-Sauveur in 1067.  Néel II, having participated in 1047 in the plot of the barons of Western Normandy against the young Duke William, which ended in their defeat at Val-ès-Dunes, lost his viscountship, was punished with seven years of exile, before recuperating his assets but not his function. Saint-Sauveur passed in the 12th century to the Taisson family then to the Harcourts.  One of the young noblemen, Godfrey, inherited it at the beginning of the Hundred Years War in which he took an active part ... on the English side.  On his death he bequeathed his barony to Edward III of England who there named one of his best commanders, John Chandos.  The earth and wood Château of the Néel family was replaced in the 12th century by a large square keep supported by flat buttresses that rise at a south-east angle, above the Vallée de la Douve.

In the 13th century to the south-west the large fortification of the Battery was added, still known as the Old Keep (Vieux Donjon), which seems to indicate that the Romanesque keep had been in large part dismantled. In the 14th century the curtain walls, the small castles and the flanking towers of the courtyard and high courts were regained and reinforced by Godefroy d’Harcourt and John Chandos.  The keep was also in part reconstructed, and crowned with machicolation and crenellations. It is in the 16th century that the maisonette of questionable allure was built on its uppermost platform that crowns it in such an unexpected manner.