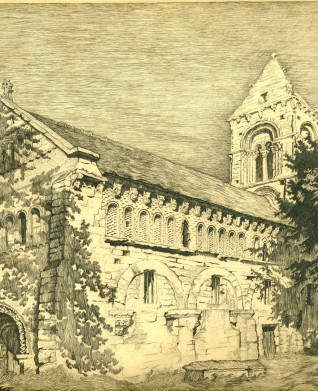 Why is it important
Saint-Pierre de Thaon shows the example of a typical parish church as these developed across Normandy and England during the Norman period.
Did you know
The Church today being physically isolated could be very thoroughly excavated , which is often impossible in churches still located at the heart of towns and villages.

The church of Saint-Pierre de Thaon was built on a site today isolated from the village but whose archaeology has revealed traces of occupation from the High Middle Ages. The seigneury of Thaon depended on the powerful barony of Creully, which in the 12th century controlled a large part of Bessin. The most ancient part of the church is the bell tower base undoubtedly contemporaneous of the great abbeys of Caen (1070-1080). The choir with two spans and flat apse is a later construction not complying perfectly with the alignment with the bell tower. The nave is long with five spans whose aisles were damaged at the beginning of the 18th century, and walled arcades. Their decoration, inside the nave, is characteristic of a penchant for rich ornaments that were disseminated during the years 1120-1130, like that of the church of the neighbouring priory Saint-Gabriel-Brécy.

The exterior elevations present a decoration of friezes and series of arches frequent in the churches of the first quarter of the 12th century. One element of the remarkable decoration – motif of billets in bas-relief arranged in a continuous strip over all the free spaces in the upper part of the south wall of the nave – can be compared to the basketry motifs on the walls of Bayeux, whose contemporaneous construction site may have influenced that of Thaon.

The church of Thaon is under the dual patronage of the cathedral chapter of Bayeux and the Abbey of Savigny, in the county (comté) of Mortain. The power and notoriety of these two patronages undoubtedly explains the architectural quality of the church, whose construction benefited from the artists working on the great neighbouring construction sites.