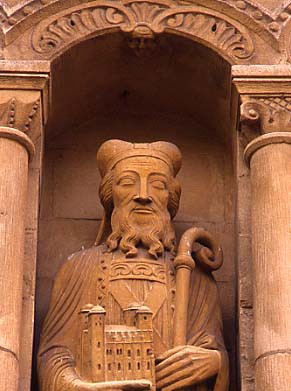 Why are they famous?
Gundulf is the only architect of the X century of whom we know the name and career.
DID YOU KNOW?
The Corps of Royal Engineers, founded in 1717 considered the Norman Gundulf as being the first amongst them.

Bishop Gundulf was a monk of the Abbey of Bec-Hellouin, in Normandy, as his master certainly was before him, Abbot Lanfranc, close adviser to William the Conqueror, master-builder of the abbeys of Caen and first archbishop of Canterbury after the conquest.
Gundulf had followed his master Lanfranc from the Abbey of Bec in Saint-Etienne from Caen and he went to England in 1070.  In 1077 Gundulf is consecrated Bishop of Rochester (he will remain such up until 1108) and he will undertake works on the cathedral in 1080.  In 1078 William the Conqueror entrusted to him the construction of the Tower of London and we think, due to similarities in the plans, that Gundulf is also the architect of Colchester Castle. Under the reign of William the Red (1087-1100) Gundulf also undertook the construction of Rochester Castle (Rochester keep, however, is a later work by Gundulf).

Gundulf was one of the major supports of Lanfranc in his work of reform of the English church.  His specific talent was his architectural ability, a man skilful in the art of construction in stone as briefly indicated in an ancient chronicle.
The model of the major towers built by Gundulf (London, Colchester) is that of the Norman châteaux like Ivry, and without doubt Rouen and Bayeux.  Gundulf also used a lot of Caen stone in Rochester cathedral.  The example of the large construction sites at Caen launched by Lanfranc in about 1060 – the Château de Caen, the Abbey for Men and the Abbey for Women – is not perhaps unrelated to his training.  The example of Gundulf therefore gives an indication of the men who were responsible for the introduction of roman architecture in England under the Norman kings.