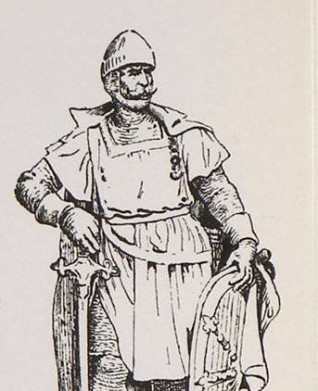 Why are they famous?
Served as Steward to the first three Norman Kings of England
DID YOU KNOW?
He was one of the most trusted men at the Norman court.

Eudo Dapifer was the most important person in Norman Colchester.  His name is linked to the construction of Colchester Castle and he founded St John’s Abbey and the leper hospital of St Mary Magdalen in the town. Eudo’s father was Hubert de Rie, the lord of the small town of Rie, about 10 miles from Bayeux in Normandy.  He was a leading supporter of William, duke of Normandy and led a diplomatic mission to the court of Edward the Confessor shortly before the king’s death in 1066.  Hubert’s four sons, of whom Eudo was the youngest, were all powerful landowners in England after the Norman Conquest.  Eudo was made Seneschal, or high steward, of Normandy by William and as a result gained the name Dapifer.  He was present when William died in Caen in 1087 and ensured that the Conqueror’s son William Rufus became the next king of England.  Eudo loyally served William Rufus and his successor Henry I who granted Eudo the borough of Colchester in 1101.Eudo died at Préaux in Normandy, but his body was buried in the church of St John’s Abbey in Colchester.  According to a contemporary writer Eudo was a popular figure in Colchester who ‘eased the oppressed, restrained the insolent, and pleased all’.