You are here Home / The Road To Hastings

The Road To Hastings 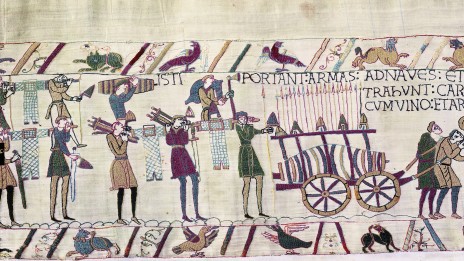 DID YOU KNOW?
Duke William's army at Hastings is thought to have consisted of 7,000 men and included not only Normans but Bretons and Frenchmen.

Duke William’s victory at Hastings in 1066, to become William the Conqueror, King of England, was the last act in a tangle of political and dynastic tensions that had begun fifty years previously.

Anglo-Saxon England had recovered from Viking raids to be ruled by the kings of Wessex, beginning with Alfred the Great. These kings extended their power, coming to rule all England. However, a renewal of Viking raids in the late tenth century saw England, under King Æthelred the ‘Unready’, come under new pressure.When the Danish king SweinForkbeardled an invasion force and conquered England in 1013, Æthelred took refuge abroad with his wife Emma and sons, at the court of Richard II, Duke of Normandy. Although Æthelred claimed back his throne after Swein’s death in 1014, Swein’s younger son Cnut returned in 1016 and won a crushing victory at Assandun, probably Hadstock in Essex, to retake the throne.

Cnut proved an adept politician and warrior, building up a ‘North Sea empire’ which at his death included England, Denmark and parts of Norway and Sweden. His marriage to two women, the Anglo-Saxon Ælfgifu and to King Æthelred’s widow Emma, complicated matters of succession. Cnut had sons by both marriages and they each ruled as King of England, first Harold‘Harefoot’ (1035-40) and then Harthacnut (1040-42). Following the latter’s death another contender for the English throne, Edward the Confessor, was installed as king. He was the son of Emma by her first husband King Æthelred.

Edward’s 24-year reign gave him the opportunity to re-establish an English dynasty. However, he had grown up in Normandy because his mother Emma was the daughter of Richard I, Count of Rouen. When Cnut had become king, Edward was forced to flee to Normandy and live in exile. On his return, Edward brought many friends and followers from Normandy. Although he married Edith, daughter of the powerful Earl Godwine of Wessex, they had no children and Edward seems to have nominated his distant kinsman William, Duke of Normandy to be his successor in about 1051. Edward’s fragile political powerbase led him to rely increasingly on Godwine’s son Harold, whose own wealth and influence grew spectacularly.

Fifteen years later, the political landscape had changed. On Edward’s deathbed in January 1066,the dying king seems to have changed his mind and nominated Earl Harold to be his successor. Duke William, without political support within England, still saw himself as the legitimate candidate and led an invasion force from Normandy. On Saturday, 14 October 1066 the two sides met on Senlac Hill, six miles (ten kilometres) north of Hastings in Sussex and in the resulting battle, Harold was killed along with many other English nobles. An abbey was built on the spot where Harold fell, and the town which grew up around the abbey was named 'Battle' after the great conflict.

The path was cleared for William to be crowned king and oversee the wholesale replacement of the English aristocracy. By his actions, William created a new empire which tied England to the Continent rather than the northern world of Scandinavia, and established a new series of dynastic relations to the English crown. From then on, the future of England was inexorably bound up with Normandy and France.