Different patrons were involved in the construction and ownership of castles. These could be kings or they could be aristocrats, who needed licences from the crown to construct their own fortifications. The ownership and control of medieval castles was an important element in the wielding of power.

Ownership of the Norman Connections castles included a combination of French and English kings, as well as aristocracy. It was mainly in the post-medieval period that changes in the use of the castles resulted in a still more diverse ownership.

In England the balance of royal and baronial authority was manifested by the number of castles held by the king and by the leading families of the aristocracy. There were significant periods of change in the control of castle ownership, such as in the early years of Henry II’s reign and after the suppression of the baronial revolt of 1173-4. At these times baronial castles could be seized and royal castles re-possessed. In 1154 the ratio of baronial to royal castles in England was 5:1. By 1214 it was under 2:1, representing a change in the balance of power.

The Norman Connections sites are all examples of urban castles. 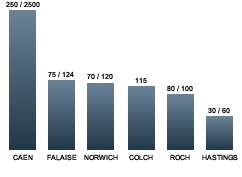 After the Civil War in England (1135-54) the King needed to take more control over who owned castles. From the 1190s he would issue licences to crenallate (construct battlements) to those barons who were considered trustworthy.

Falaise Castle was built in the city that witnessed the birth of William, the future conqueror, around 1027. The first indication of a castle there dates back to 960, under Richard I of Normandy. Major improvements were added by King Henry I Beauclerc (1100-35) and the Plantagenets. It remained in the possession of the Dukes of Normandy until the start of the 13th century, when it was captured by King Philip II of France, who ordered the construction of the Talbot Tower. Possession of the castle changed hands several times during the Hundred Years War (1337-1453). It fell out of use in the 17th century and became the property of the City of Falaise after the Revolution.

Rochester Castle was initially built soon after the Battle of Hastings. In 1087-88 work started to rebuild the castle in stone, under Gundulph, Bishop of Rochester (who was also responsible for Colchester Castle, the Tower of London and Rochester Cathedral). The great tower was built by William de Corbeil, Archbishop of Canterbury, and remained under the authority of the Archbishops until 1215. It was then taken over by the crown after a siege by King John. It remained a royal castle. It was sold into private hands in 1610 by King James I. The estate was purchased by Rochester Corporation at the end of the 19th century. Since 1984 it has been in the care of English Heritage and more recently under a local management agreement with Medway Council.

Caen Castle was owned by Dukes of Normandy and Kings of England from c1060 to 1204. It then passed into the hands of the Kings of France, starting with Philip II, from 1204 to 1417. It was then held by the English Kings Henry V and Henry VI until 1450, when it fell to Charles VII of France. Caen castle remained with the Kings of France until 1789. It then came under the ownership of the military administration. After the Second World War, Caen Castle became the property of the City of Caen.

Colchester Castle was begun in 1076, under the supervision of Gundulph, Bishop of Rochester as a royal castle. It was taken by the French in the early 13th century but re-taken by King John in 1216 for the English crown. It was during the 13th century that it became used as a prison. It continued in use as a county gaol, with a short gap in the 17th century, until 1835. By 1683 the Castle was in private ownership. It was sold in that year to John Wheeley who began its partial demolition for building materials. How much was demolished is still hotly debated. In 1727 the Castle was given to Charles Gray, a local lawyer and antiquarian, as a wedding present. It then passed to the Round family who in 1860 offered the Castle as a home for the town museum. In 1920 they sold the Castle to Viscount Cowdray, a former MP for the town, who presented the building to the Borough of Colchester for continued use as a museum and as a memorial to the First World War.

Hastings Castle was held by the Counts of Eu for most of the early Norman period. It passed into the hands of the King in the mid-12th century, under Henry II. King John stayed there in 1201. It alternated between the crown and the Eu family until 1445, when it passed to the Hoo and Hastings family. It was then held by the Pelham family from 1591 until 1951. It has been in the ownership of Hastings Borough Council since that date.

Norwich Castle was constructed in 1067 as a royal castle. King Henry I paid visits to Norwich and spent Christmas there in 1121. The castle was briefly taken in 1174 by Earl Hugh Bigod, during a revolt, but returned to royal control late that year. In 1220 it was first used as a gaol, which it remained until 1887 when it was bought by the City of Norwich. It opened as a museum in 1895.