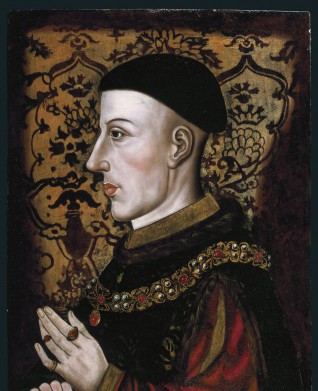 Why are they famous?
Henry V is the hero of a Shakespeare play, which has had numerous adaptations, including in the cinema.
DID YOU KNOW?
In the anonymous portrait of the X century, Henry V has short hair on the nape of his neck, like the Norman warrior in the past autrefois to facilitate the wearing of the helmet.

Henry V is crowned King of England in 1413 and set about profiting from the weakness of the French kingdom to retake control of Aquitaine and Normandy: in 1066, Hastings opens up England to the Normans, in 1415 Azincourt was a prelude to the English domination in Normandy (1417-1450).
In 1415, the expedition from Harfleur to Azincourt was nothing but a raid destined to profit from the civil war in France between Armagnacs and Burgundians.  The base established in Harfleur allows Henry to prepare an actual invasion in 1417.  The English debark in the Touques estuary, seize Lisieux.  The siege of Caen commences on 15 August 1417.  The town is taken and sacked but the Château resists and will not be reduced by force.  The French troops negotiate its surrender on 19 September.  Following this siege the Norman towns will surrender without a fight or at the end of brief resistances.   Only Falaise will resist from December 1417 to February 1418.  Rouen will also hold out from July 1418 to January 1419.
Domfront and Château-Gaillard are the last to fall, soon after Rouen.  The Mont-Saint-Michel will never surrender.  These episodes illustrate the capacity of the reinforced châteaux after the raids of Edward III (1346, 1356) to oppose a durable resistance against the armed forts and the first guns.
At Rouen, as elsewhere, capitulation is obtained by negotiations and it is also in this way that Henry V obliged Charles VI to disinherit the Dauphin Charles VII and to recognise him as the regent (1420).  Henry V marries the King of France’s daughter who gives him a son, heir of both crowns: Henry VI (1421-1471).  Dead in 1422, two months before the King of France Charles VI, Henry V did not manage to wear the crown of France itself thus conquered after a landing in Normandy.