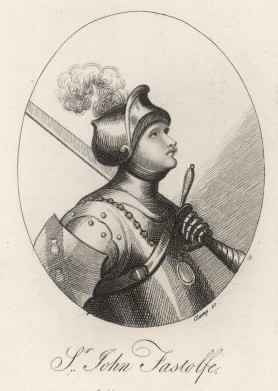 Why are they famous?
Falstoff was accused of desertion by Sir John Talbot at the battle of Patay in 1429. This is the reason for which Shakespeare made him a portrait of a coward.
DID YOU KNOW?
Far from being a brute and a drunk, the real Falstaff counselled the Duke of Bedford on the foundation of the University of Caen in 1432.

A famous character of English literature is associated with the history of the Château de Caen: the “Falstaff” of Shakespeare who is modelled on Sir John Fastolf (1380-1459), captain of the Château de Caen around 1431/1435.
Falstaff is a secondary character in the historical dramas “Henri IV” and “Henri VI”, his death is dramatized at the beginning of “Henri V” and he is the main character of the play “The Merry Wives of Windsor”.
Shakespeare wrote a caricature role for the comic routine intervals of these dramas but Sir John Fastolf (1380-1459) is in reality a character very representative of the minor aristocracy, the English gentry, made rich and parvenu in the top ranks of society thanks to the wars of the King of England.  Fastolf serves in Ireland and in Aquitaine at the end of the reign of Henry IV.  He participates in the taking of Harfleur in 1415.  He is made a knight in 1416.  After the conquest of Normandy by Henry V, Fastolf receives numerous commands, in Normandy (Alençon, Honfleur, Harfleur, Caen, Rouen, Fécamp, etc.) but also in Paris (the Bastille, in 1421), and in other places (Calais, Sillé-le-Guillaume, Soubise, etc.).  He enters into the Royal Order of the Knights of the Garter in 1426, becomes Grand Master of the house of the Duke of Bedford, regent of France for the young King Henry VI.  Fastolf will also be governor of Maine, lieutenant of the King for Normandy and at the end of his life, returned to England, he will be a member of the King’s council.
This success is that of a renowned soldier whose missions were principally the command of military bases such as that of captain of the “town, Château and keep at Caen” where he organises the defence during attacks by troops of the King of France or Norman acts of rebellion.
Native of Norfolk, Fastolff also has connections in Norwich and participates in the Guild of Saint-George in this town.  He died in 1459 in his Château de Caister-on-Sea (near Great Yarmouth, Norfolk) and is buried at the Abbey of Saint-Benet, that he had richly endowed, but of which there remains but ruins at Ludham (Norfolk), to the North-East of Norwich.