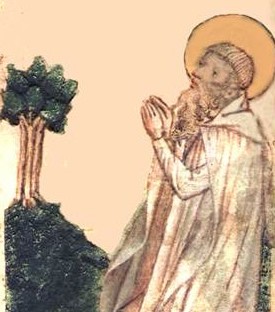 Why are they famous?
St Godric is remembered for his compassion towards animals, protecting creatures that lived near his home in the forest, even snakes and wild boars.
DID YOU KNOW?
Reginald recorded the words and notation of four songs, which are the oldest in English with surviving music. The songs were claimed to have been taught to Godric in a vision by the Virgin Mary.

According to his biographer, the monk Reginald of Durham, Godric came from a poor but virtuous Norfolk family. He took up the life of a pedlar, later becoming a merchant and sailor. He spent many years at sea, trading and travelling, miraculously avoiding certain death several times. At Lindisfarne, Godric experienced a spiritual vision of St Cuthbert, after which he decided to devote himself to religion. Godric took up the cross and made pilgrimages to Jerusalem, Rome and the shrine of Santiago de Compostela in Spain. On his return to England he continued to wander, living as a recluse in woods and caves. Around the turn of the century, he was granted a hermitage at Finchale by Flambard, Bishop of Durham, where he lived for 60 years until his death. It is said that he gave wise counsel to men such as Thomas Beckett and Pope Alexander III.