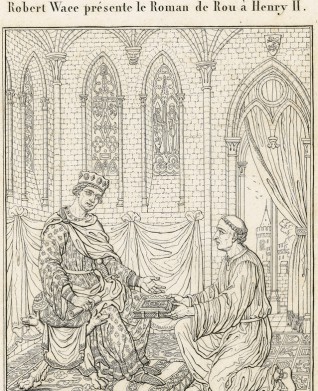 Why are they famous?
Wace wrote the first chronicle on Normandy in French and translated from English and into French the history of Arthur and the kings of Britanny.
DID YOU KNOW?
Wace is the first author to speak of the Round Table and the Court of King Arthur.

Wace, born around 1100 on the Island of Jersey, takes up his studies in Caen and Paris.  Between 1135 and 1170, he occupies with the Anglo-Norman kings the function of “reading clerk”.
Wace attracts the attention of the Royal Court by publishing several works in the vernacular (The Life of Saint Margaret, The Life of Saint Nicolas, and Notre Dame Conception).  In 1155, he publishes the ‘Roman de Brut’ (a verse history of Britain), dedicated to Queen Eleanor of Aquitaine:  it is a translation into roman language of the publication of Geoffrey of Monmouth, the ‘Historia regum Britanniae’.  Legendary history of England, it is the first work in French dedicated to the legend of Kind Arthur and the Round Table, allowing Henri II Plantagenet to present himself as a legitimate heir.
In 1160, Wace undertakes to write the ‘Roman de Rou’ at the request of the King.  It is a versified chronicle covering the history of the Duchy of Normandy from the period of Rollon up to the battle of Tinchebray (1106).  Wace modified his project several times, which he would never in fact complete, having, in all probability, lost the confidence of Henry II Plantagenet, in favour of Benoît de Sainte-Maure, who composed the History of the Dukes of Normandy (‘La geste des ducs de Normandie’ or  ‘Historiae Northmannorum’).
Wace’s work, an exceptional linguistic testimony, is read both as an historical work, the author loyally following his sources, but also as a poem, giving the narrative a more dramatic and fictional form.  The ‘Roman de Rou’ additionally contains very valuable descriptive aspects about Caen and its organisation, Wace having passed a good part of his youth in the Norman town.