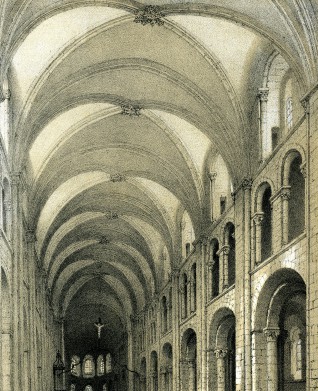 WHY IS IT IMPORTANT
The Abbey of Lessay shows the first experiences of ribbed vaults in Normandy; the model originated perhaps in Durham.
DID YOU KNOW?
Nearly entirely ruined in 1944, the Abbey of Lessay has been entirely rebuilt identical to the original.

This large Benedictine abbey of Cotentin was founded around 1056 by Turstin Haldup, Lord of La-Haye-du-Puits, foundation confirmed in 1080 by William the Conqueror. If the choir of the abbey church was already built at the end of the XIth century, the nave was built in the first years of the following century. If the building was almost totally destroyed on two occasions, in 1356 by Charles the Bad during the Franco-Navarrese war, and in 1944 during the Liberation combats, the reconstructions of Pierre le Roy, future abbot of the Mont Saint-Michel, in 1385-1420 and those of Yves-Marie Froidevaux in 1945-1957, respected the original arrangements.  It is therefore a monument of the purest Norman Romanesque style that we visit today.

The Benedictine plan in the form of a Latin cross is used in most of the large Norman abbey churches: apse with chapels to scale, grafted onto the aisles and the arms of the transept, and long nave with aisles.  Externally the general balance is assured by revising the proportions: chapels, choir aisle, semi-circle of the apse (chevet), transept, central tower crowned with its hip roof.  The interior elevation is that of the Norman Romanesque churches (broadly outlined at Bernay and Jumièges): Large arcades, an intermediate level of tribunes and high windows. In the nave of Lessay however, the structure of the arcades with double archivolt and the profile of their cruciform columns are simplified.  The intermediate level (triforium) merely has small gemel windows opening onto eaves designed to buttress the vaults of the nave.

But Lessay, above all, innovates by introducing the revolutionary covering of tracery vaults so, here, from the end of the 11th century, is one of its first uses, well before the development of rib vaults by Gothic architects. The decoration of the capitals is sparingly reduced to simple crockets and flat leaves to promote unity, the regular rhythm of the columns and arches, the vertical nature of the spans, simple order and majesty.