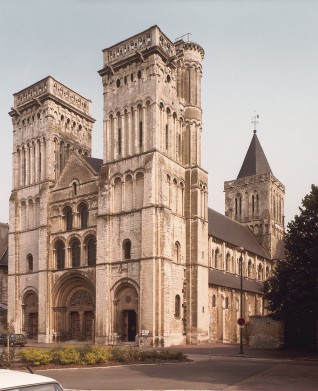 WHY IS IT IMPORTANT
The Abbaye-aux-Dames de Caen was richly provided with land in England. The choir of the abbey church had been consecrated in 1066 in the presence of William and Matilda with the noblest Norman seigneurs united for the occasion of the gathering of the fleet and the invasion army, at Dives, near Caen.
DID YOU KNOW
In 1961, the tomb of Matilda was opened to identify and study the skeleton. In 1984, Queen Elisabeth II came to pay homage at the tomb where Matilda had been buried anew

In the same manner as at Saint-Etienne at Caen, the Abbey Church of Saint-Trinity; typically fits into the Norman churches mould, having what is known as “harmonic” façades, because of the balance between the internal organisation of the building (central nave with two aisles and elevation on three levels capped with two towers) and the exterior.

It was defaced by activities in the 18th century and restoration in the 19th century added a sculpted decoration having no association with the austerity of Norman architectural tradition.  But the interior shows a majestic Romanesque nine-span nave and a choir completed by an apse with a “cul-de-four” vault. The decoration is austere yet has sculpted capitals in the choir and walls punctuated by rows of blind arcading. Two capitals present exotic animal decorations: wading birds and elephants.

One of the major interests of the Trinity is its crypt, a unique example among the Norman abbey churches with the entrance via two narrow curved staircases on either side of the choir. It is both one of the most ancient parts of the abbey church and the most authentic.  Sixteen columns are located there in four perfectly regular lines in a very narrow rectangular space, producing the impression of a petrified forest.  The treasure of the Abbey enriched by the English spoils under William the Conqueror and the relics brought back from the crusade by Robert Courteheuse was locked away in the crypt.  As in Saint-Etienne, the entrance to the choir is marked by a tombstone: that of Matilda, Duchess of Normandy, Queen of England and founder of the Abbey.