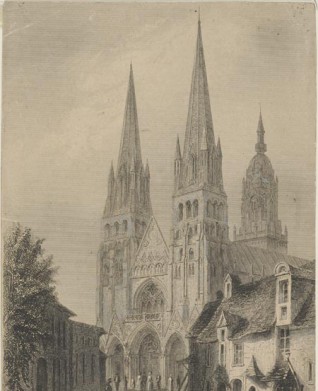 WHY IS IT IMPORTANT
Bayeux was the cathedral of Bishop Odon, half-brother of William the Conqueror who became the most richly endowed seigneur in England after the Conquest.
DID YOU KNOW?
The embroidery of the Conquest, known as "The Bayeux Tapestry", was exhibited in the choir of the cathedral where it notably recalled the role of his patron, the Bishop Odon, with his brother William, and the importance of the relics on which Harold had sworn allegiance.

Bayeux was the seat of a bishop from the end of Antiquity and, under the dukes of Normandy, plays the role of second capital of the duchy until William the Conqueror transferred this function to Caen. This decision is in part motivated by the role played the Episcopal City in the revolt defeated in 1047 at the battle of Val-ès-Dunes. The episcopal seat remains however at Bayeux.  It is entrusted to the half-brother of the duke, Odon de Conteville. The first Romanesque cathedral was consecrated in 1077, but the works were begun under the episcopate of Hugues d’Ivry (died in 1049). The crypt is the only feature of this period along with the capitals of the vaulted transept. The façade north tower contains a vaulted room that archaeologists agreed to place at an historic date, in the years 1070, for research on the techniques of vaulting that will stop at rib vaults.

Among the most original elements of the Romanesque period, the decoration of the walls of the nave is remarkable.  This part of the cathedral is dated from the second Romanesque church, rebuilt after the fire of 1105, ordered by King Henry I Beauclerc at the time of his victorious march against his brother Robert Courteheuse. The works were to commence after the stabilisation of the duchy following the battle of Tinchebray (1106) and continue under the episcopate of Philippe d’Harcourt (1142-1163).  The decoration of geometrical motifs in continuous strips on the arcades of the nave is also found on the neighbouring churches of Secqueville-en-Bessin and Thaon.  But at Bayeux, it is really exuberant.  This highly decorated style undoubtedly finds its origin in the English models brought back with Henry I and that we see appear in many Norman churches in the first third of the 12th century.