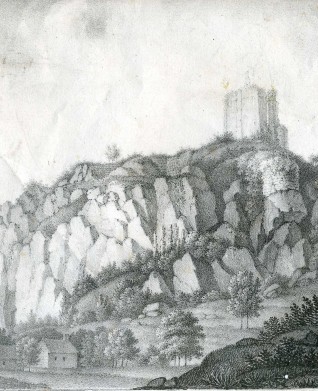 WHY IS IT IMPORTANT
Domfront occupies a strategic place at the southern border of Normandy. It is undoubtedly the first keep built by Henry I Beauclerc (around 1092).
DID YOU KNOW?
In 1169, Henry II receives at Domfront the pontifical legates who must reconcile him with Thomas Becket / Chrétien de Troyes is alleged to have stayed at the court of Henry II at Domfront, finding there a source of inspiration for his books concerning the Arthurian legend / Eleanor of England, daughter of Henry II Plantagenet and of Eleanor of Aquitaine was born at Domfront; she is also buried there: her tomb is situated in the Church Notre-Dame-sur-l'Eau.

The Château of Domfront, dismantled in the XVIIth century, occupies the western end of a rocky promontory from the top of which the town of Domfront dominates the valley of the Varenne. The first mention of the Château dates from the first quarter of the XIth century, the period during which it belonged to the Bellême family.  Occupied by the Count of Anjou, Geoffroy Martel, in 1048, it is taken by William the Bastard in 1051 and placed from this date under the authority of the Duke of Normandy.

The quadrangular keep dates from about 1092 when Henry I Beauclerc makes Domfront his first base in Normandy.  It is from this fortified site that he develops his power in Normandy against his brother Robert Courteheuse.  When Duke and King, he will multiply this category, notably at Caen, Arques and Falaise.  Only two sides of the building survive, the north and west, incomplete, 3m thick and c. 28m high.  Its original dimensions (26.30m x 22.40m) making it one of the largest Norman keeps.

The elevation must have been formed of three levels.  The lower level was windowless, the keep entrance being on the first floor, via a door, under a semi-circular vault, 6m from the ground in the western wall.  Archaeological digs, carried out in the 1990s, uncovered, at twenty metres to the west, the remains (not currently visible) of a Romanesque building with a double nave that could have been a stateroom (aula) characteristic of the palatial architecture of the period.  The defence of the east side, towards the town, was assured by a moat, circular towers and a curtain wall at the foot of which were built blockhouses in the 13th century.