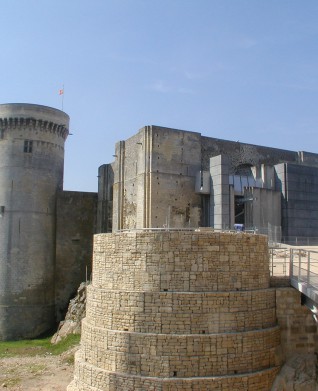 WHY IS IT IMPORTANT
Established in the home town of William the Conqueror, the Château displays a rare example in Normandy of an Anglo-Saxon keep of the XIIth century that is almost complete, with interior volumes and and means of access very comparable to the keeps still in existence in the same period in England.
DID YOU KNOW?
Symbolically, the Château of Falaise marks the departure point of the William saga. It will be among the first châteaux that he will retake from the hands of the rebels at the time of his reaffirmation.

If the Château of Falaise is closely linked to the fate of the most famous of the Norman dukes, William the Conqueror, the rock on which it is established already had a fortification from the first days of the duchy.  Masonry ramparts were found there from the 10th century.  At the birth of William, undoubtedly at the end of the year 1027, the Château had a large courtyard protected by walls without towers, but capped with wooden galleries.  The ‘high court’, separated from the outer wall by a deep moat, contained at its steepest point a building of which there remains today only some foundation masonry.

It is in effect in the 12th century, around a century after the birth of William, that the largest construction campaign on the site, took place there. Henri I Beauclerc, third son of William, King of England and Duke of de Normandy, born in England after the Conquest, gives it the appearance of a ducal château with the addition of flanking towers along the ramparts, a chapel at the heart of the courtyard, and above all an impressive Romanesque keep in the tradition of the towers built by the Normans in England in the aftermath of the Conquest.

Later, under the dynasty of the Plantagenets, in the second half of the 12th century, the works will continue, always in the direction of a reinforcement of defences, but also to enlarge the residential spaces, notably with the additional of the “Petit Donjon” (Small Keep) side by side with the “Grand Donjon” (Large Keep).  Later, in the 13th century, at the time when Normandy becomes French, a large “philippian” tower, 35 metres in height is added.  Other modifications of a defensive nature will be made during the Hundred Years War.

At the end of the Middle Ages, the keeps, uninhabited, were collapsing, but it was not until 19th century, and an emergency listing as a historic monument, that the works could be carried out.  Later, between 1986 and 1997, a project of great stature returns the keeps to their former nobility, with the reconstitution of the sections that had disappeared, and the recreation of elements destroyed for which the sources were lacking.  Finally, between 2003 and 2012, the programme draws to a close with the construction of a reception building, the entire restoration of the high court and the ramparts.  A new era is inaugurated for the Château, which takes on a new lease of life to the great delight of its visitors.