Church of Saint-Nicolas at Caen - 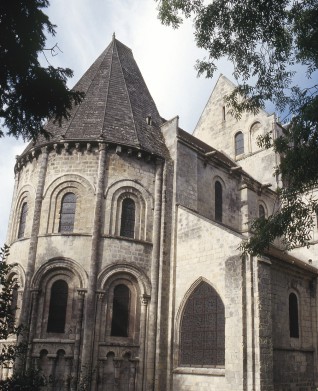 The church of Saint-Nicolas is attested for the first time in 1083. It was desired by the monks of the Abbey of Saint-Etienne who had banked on a rapid development of the area.  The demographic increase anticipated by the construction of the parish church can be considered as a failure as it was only at the beginning of the 20th century; and the development of transport; that the hillside on which the church was built became appealing.  From the end of the 11th century the construction works were halted.  The narthex façade would never be completed and the elevation of the two towers that were to surround it would not be realized.  Only the south tower would be built in the 15th century, but according to a different plan, from a narrower range.

The plan of the church, inspired by that of the abbey church of Saint-Etienne before the construction of the Gothic choir, is in the Latin cross form of the Benedictine tradition.  The decoration of the building is of Norman tradition, of a remarkable sobriety. The capitals of the nave and the choir do not escape this rule and are decorated in simple crockets and flat leaves.

Worship is no longer practised today in the church of Saint-Nicolas, but it is used regularly by the town of Caen for organising concerts.  The public can thus admire a Romanesque building, very little altered with time, near to its original state.  This situation, that is also a due to luck, is unique to Caen. To add to the charm of the church, it is bordered by a cemetery, today abandoned, where the vegetation that reclaims its rights within the abandoned tombs adds to the romanticism of the place.