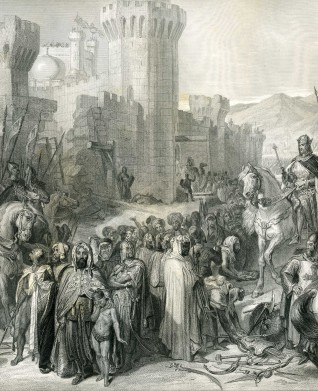 Why are they famous?
King Philip ended 150 years of Anglo-Norman and Anglo-Angevin domination on both sides of the Channel.
DID YOU KNOW?
Philip’s life was spared thanks to an English saint: in 1179, his father Louis VII came to pray at the tomb of Saint Thomas Becket at Canterbury for his son to be healed.

The reign of King Philip is marked by the dismemberment of the Anglo-Norman empire.  In 1180, Normandy, Britanny, Anjou, Poitou, Aquitaine … are under the control of the King of England, Henry II (1154-1189).  However the Plantagenet does not bear the title of King in France: he is Duke or Count and owes feudal homage to the King of France.

The young King Philip knows how to profit from Henry’s war against his rebellious sons and in 1188 obtains the homage of Richard The Lion Heart for all the possessions of the Plantagenets in France.  After the death of Henri II (1189), Philip organises the third crusade with Richard (1190), but he returns to France from 1191 to deal with the interests of the kingdom and does not hesitate to profit from the captivity of Richard (1192-1194) to pursue the Plantagenet estates.
This time he obtains the homage of King John (‘Jean sans Terre’) (1193).
On the return of Richard (1194-1199), Normandy pays the heaviest toll on the resumption of war, between raids, sieges and truces rapidly broken.  The death of Richard in 1199 allows King Philip to contest the succession of King John in favour of his nephew Arthur. Legend has it that the young prince was imprisoned at Falaise before being treacherously assassinated by John (1203).

Philip uses feudal law to pronounce the confiscation of the Plantagenet fiefs in favour of the royal estate of France (1203).  Within several months (1203-1204) Normandy is conquered and the long siege of Château-Gaillard brings to an end nearly 150 years of an “empire” of which only the Channel Islands remain.
In 1214, the striking victory of Bouvines under a coalition supported by the King of England ends in the triumph of King Philip, and in 1216, his son Louis takes control of the south of England with the ambition of becoming its king. In 1223, at the end of his reign, Philip regains control over most of the larger principalities. The Plantagenet area is reduced to a portion of Aquitaine, to the south of Bordeaux.