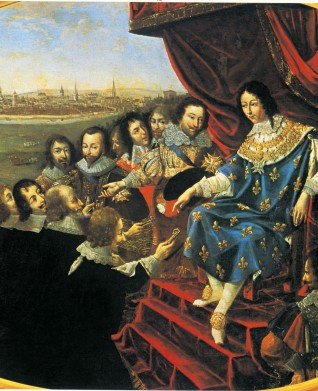 DID YOU KNOW?
Under the reign of Louis XIII, Cardinal Richelieu orders the destruction of the fortified castles of the nobility. Only royal fortresses such as Caen are authorised.

The King of France Louis XIII (1610-1643) came to power in circumstances marked by the religious wars and plots by the grand princes of the kingdom following the assassination of Henry IV (1610).  With the support of part of the nobility, the mother of the King, Marie de Médicis, makes a number of attempts to oppose the young King Louis XIII; these are “the wars of mother and son” in 1619 and 1620.
One of the incidents of these wars occurred in 1620 under the walls of the Château de Caen.  In Normandy, the Duke of Longueville, governor of Normandy, sided with the queen-mother.  Alexandre de Vendôme, illegitimate son of King Henry IV and governor of the Château and the town of Caen, supports the rebels.  He sends to Caen a captain named Prudent who begins to defend the Château, on 1st July 1620.  The town’s bourgeois elements found themselves caught between the rebels of the Château and the King’s troops who were advancing towards Caen.  The Château was sieged but once King Louis XIII himself arrives in town, Captain Prudent surrenders on 17 July 1620, without a real battle.
An anonymous painting represents the bourgeois of Caen returning the keys of the town to King Louis XIII.  In the background one sees a rare representation of the town within its walls and one can distinguish the massive silhouette of the Château keep.
The siege of 1620 is the last true battle of the Château de Caen.  Following this episode Louis XIII arranges for an atlas of the towns and fortified châteaux of the King to be produced.  In it one finds the familiar foreground of the Château de Caen (1630).