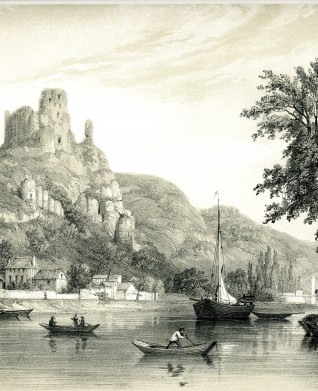 WHY IS IT IMPORTANT
Château Gaillard shows very numerous architectural innovations. It shows the first example of a keep surrounded itself by a defensive wall equipped with a towers.
DID YOU KNOW?
Château Gaillard was reputed to be impregnable until French soldiers find their way in … via the latrines.

Established at the confluence of the Seine and a small tributary, the Gambon, the Château-Gaillard whose function was to prohibit use of the Rouen road and monitor the Vexin, disputed between the dukes of Normandy and the kings of France and recklessly conceded by Richard to Philippe Auguste in 1195.  The castle was in fact only the keystone of a vast presence locking the Seine Valley and including strong advances, the ramparts of the large villages (bourgs) of Vieil Andeli Petit Andeli, a fortified bridge and the royal manor on an island in the river.

Built on a spur of the right bank of the river, cut off on three sides, the structure presented revolutionary innovations that made it a masterpiece of military architecture.  In particular the deeper extension of the defences on a unique junction: the keep, provided with a spur and solid buttresses bearing the first machicolation; connected to its flanks, its elliptic chemise wall with a enveloped profile to eliminate any dead angles; then a trapezoidal curtain wall flanked by four large round towers, these two outer walls one fitting into the other; and finally, at the weakest point, an enormous triangular fortress, supported by high corner towers and reinforced at its tip by the powerful bastion of the Mint (la Monnaie).

This Bastille; a sort of shield made inaccessible by a deep moat; stood facing the plateau, from where attacks would originate.  It is naturally on this terrain that Philippe Auguste installed his siege equipment, his archers and his sappers at the end of the summer of 1203.  On 6 March of the following year the Bastille capitulated, opening the road to Rouen and Normandy to the King.  The death of Richard in 1199, the passivity of John Landless, the insufficiency of the garrison, but also the presence of the neighbouring plateau, where the enemy was able to place its troops, was the reason for the formidable and successive defences of the Château.  Despite everything, this constitutes a sort of conclusion of the Romanesque military architecture and introduced a new age of fortified castles, marked by the tight and concentric formation of the fortifications and the contraction of the defensive perimeter.