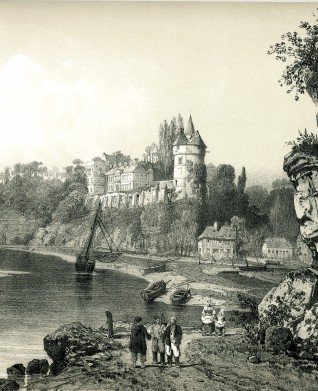 From the beginning of the 12th century, the Château of Tancarville was the main seat of one of the most powerful lineages of the Pays de Caux at the time of the dukes, that of the Chamberlains of Normandy.  This family of Great Officers of the Crown were already landowners in the region of Lillebonne towards the middle of the 11th century; but it is only a little after 1100 that it takes the name of the land ‘Tancarville’ and that the Château appears for the first time in texts.

The castle occupies the end of a triangular spur that emerges from the hillside of the Seine.  A moat, large and deep, separates it from the flat terrain.  From the ducal period there only survives the enormous ‘motte’ (mound), on which stands the ruins of the “Grosse-tour (Large Tower)” of the 15th century, perhaps some elements of masonry visible were a section of wall has been torn out at the south-east angle of this tower, and finally the imposing residential tower of the 12th century, known as “Tour-carrée” (Square Tower), that rises at the north-west angle of the outer wall.  For the rest, the essential of the medieval parts date from a reconstruction at the end of the XIVth and beginning of the 15th century.