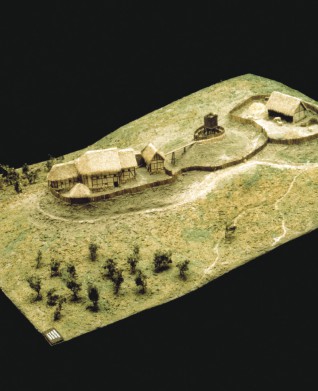 Why is it important
The Motte de Grimbosq is an emblematic model of a château in earth and wood. It is the first site of this type, entirely excavated in a scientific manner in Normandy.
Did you know
The Château à motte is still a measurement of political disorders: in England it appeared with the arrival of the new Norman power, in Normandy it multiplies on the contrary during periods where the duke is weakened.

The ‘Motte’ of Grimbosq or Château of Olivet is found at the heart of the forest of Grimbosq, forests on which depends Cinglais, a small Basse-Normandie region located some fifteen kilometres to the south of Caen, squeezed between the River Orne and its tributary the Laize.  Calvados General Council restored and developed the remains discovered by the archaeological digs carried out from 1975 to 1978.  The Motte of Grimbosq exists due to the presence of Raoul l'Angevin in Cinglais, ancestor of the Taisson family, who arrived in Normandy between 1017 and 1025. The very short existence of the ‘Motte’ of Grimbosq, before the middle of the 11th century should be placed within the context of rivalries between two branches of the Taisson family in a period where ducal authority was in decline, Raoul Taisson being one of the conspirators who would be defeated by the Duke Guillaumet at the Battle of Val es Dunes in 1047.  The Château is built on a rocky spur formed by the junction of two valleys to the steep flanks that afforded it good natural defence.

The ‘Motte’ on which rose a wooden tower and observation or lookout post, occupies a central position.   It is surrounded by two courtyards; the north one, which is narrower and occupies the end of the spur.  Archaeological digs have revealed here the remains of a large habitation (the residence of the seigneur), a chapel and a kitchen.  There should be added to these buildings a small masonry tower that gave access to a walkway allowing the top of the Motte to be reached. The south courtyard, of larger dimensions, contained a horse enclosure.  The remains of a forge and another building, in all probability used as a stable, were also discovered there.  The presence of numerous horse shoes and pieces of harness in the archaeological levels confirms this usage.  The important presence of the horse and the discovery of characteristic objects during the archaeological investigations (parts of games, jewellery, etc.) confirm undoubtedly the aristocratic character of the Motte of Grimbosq.