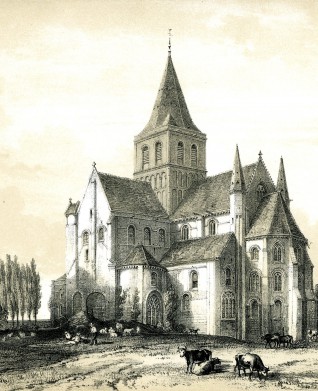 The abbey was founded in 1032 at the heart of the forest by Duke Robert the Magnificent. It has combined the bygone heritage of a small religious establishment created at the beginning of the 11th century by Saint Vigor, Bishop of Bayeux, and destroyed by Scandinavian invasions.  The Benedictines then restored; as at Saint-Marcouf or Orval; the religious continuity beyond this hiatus. Of the ducal monastery nothing remains and the current abbey church appertains to a reconstruction of the last quarter of the 11th century.

Externally, the major part of its nave (five bays) was removed from the church in 1811. The northern crosspiece of the transept and the last level of the crossing tower were renovated in the 18th century. Internally, the ‘rond-point’ of the choir was provided with Gothic vaults in the 14th century and the pillars of the vaulted transept were surrounded in the 15th century with strong cylindrical columns.  However, these additions diminished very little the Romanesque architecture of Cerisy. The church respects the traditional Benedictine plan of the grand Norman abbey churches (Bernay, Lessay, etc.), elevation on three levels (large double-arched arcades and composite columns, tribunes, high windows) and a wooden ceiling.  The level containing the tribunes is formed in the nave of two large bays set into a semi-circular arch, and in the choir of two gemel windows. The Norman dense wall technique allows a walkway to be inserted at the high window level (another feature of regional architecture) and the partition to be split: towards the exterior a large Romanesque opening, towards the interior three consecutive bays framed by a torus and placed on two small side columns (which reminds us of the primitive arrangement of the nave of Saint-Etienne of Caen).

Originality that is the most obvious is, however, the superimposition of three levels of bays in the ‘rond-point’ of the choir and of two wall passages (‘coursières’) (this considerable reduction of the Romanesque masonry to improve the ventilation of the opening required the subsequent construction of two solid buttresses). The desire to let air and light circulate, by limiting solid walls and multiplying open spaces, to harmonise and lighten the three levels (one, two, then three openings), to simplify the decoration to prioritise the contours and the rhythmic cadence of the arches, are inspired by the great abbey church of Saint-Etienne and show the degree of balance which Norman Romanesque art had acquired at the end of the 11th century, before the great English abbey churches and cathedrals take their turn.