Abbey of Saint-Etienne at Caen, Abbaye-aux-Hommes - 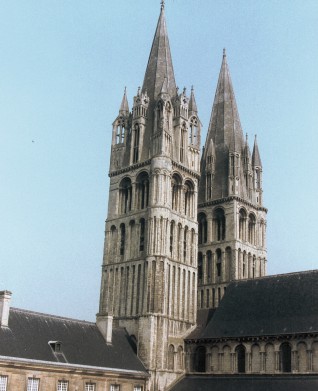 DID YOU KNOW?
William the Conqueror had decided to be buried at Saint-Etienne de Caen. His magnificent tomb was devastated during the Wars of Religion (1562). Only one leg bone of the Duke has been preserved and buried once again in the Church, under a simple slab.

Duke William the Conqueror and the Duchess Matilda founded the Abbayes-aux-Hommes (c. 1063) and Abbayes-aux- Dames (between 1059 and 1065) to enhance the development of the new ducal capital.  At Saint-Etienne de Caen, the Abbot Lanfranc managed the works until his nomination to Archbishop of Canterbury in 1070. The dedication took place in 1077, however the west façade (with the exception of the Gothic arrows) would only be built at the end of the 11th century and the nave had vaulting added under the reign of Henry I Beauclerc, c.1120.

The basic layout was the Benedictine floor plan in the form of a Latin Cross and an apse with chapels to scale. But a Gothic choir was reconstructed at the beginning of the 13th century, respecting the Romanesque structure of the church as much as possible. The Romanesque nave presents characteristics that will spread throughout the great English abbey churches or cathedrals, for example in Norwich. It is vast, with large arcades and largely open tribunes on the second level. The composition of the pillars is alternated from one span to another and a gallery runs along the third level. The façade with two towers, large and austere in is decoration, evokes the Carolingian imperial and Ottonian architecture adapted by the Normans and spread throughout all Anglo-Norman sites.

William had desired a church worthy to hold his tomb and celebrate his glory. Saint-Etienne translates not only this wish but expresses again the power of ducal Normandy and the rigorous perfection achieved from the end of the 11th century by Norman Romanesque architecture.