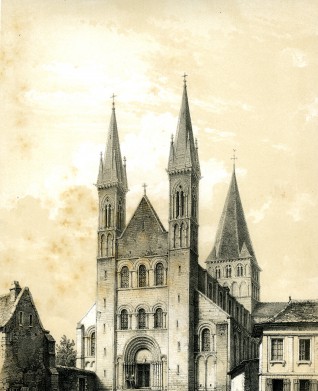 DID YOU KNOW?
In Boscherville there is a bas-relief representing Saint Eloi issuing coins. It is perhaps an allusion to the financial charges of the Tancarvilles.
WHY IT IS IMPORTANT
Boscherville shows the power of the wealthy families after the Conquest. It is not in fact a ducal foundation but an initiative by the seigneurs of Tancarville

Located upstream from Saint-Wandrille and Jumièges, the Abbey of Boscherville at the beginning of the 12th century,  compliments the network of great Benedictine abbeys richly provided by the dukes of Normandy and the grand Norman barons on the Seine Valley. They fully profit therefore from the agricultural wealth of the region, from the navigation and the tolls on the river and the contacts between Rouen and London.

The abbey church of Saint-Georges was built for a group of monks called Saint-Evroult-en-Ouche (the abbey of the monk historian Orderic Vital). The foundation is placed under protection of the Lords of Tancarville. This family held the Manor of Boscherville before receiving the honour//distinction of Tancarville for services rendered to the dukes of Normandy at the beginning of the 11th century.  The Tancarvilles kept too, in a hereditary manner, the charge of Chamberlain of Normandy from Raoul (died in 1080), guardian and companion of the young William of Normandy. It is therefore a very powerful seigneur, William of Tancarville, his son (died in 1129), who installed the Benedictine community at Boscherville around 1113.

Completed undoubtedly around 1130, little altered subsequently, the abbey church is one of the best preserved specimens of Norman architecture of the time of Henry I Beauclerc († 1135). Built on a classical Benedictine plan and directly inspired by the Abbey of Saint-Evroult-en-Ouche (completed in 1099) the church is harmoniously proportioned (exactly 200 feet long, by 60 wide, i.e. 66.30m x 19.90m).  It introduces capitals with carved decorations, widespread in the constructions during the reign of Henry I both in Normandy and England.  The Chapter House with richly carved arcades is a beautiful example of later Romanesque art (end of the XIIth century) showing that the Abbey has continued to benefit from important patronage during the entire Anglo-Norman period.