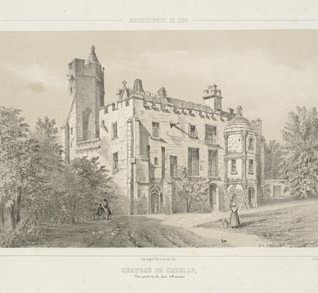 The Château of Creully dominates the Vallée de la Seulles and dominates the vast landscape of Bessin.  The seigneury found in Hamon “as Dentz” [ugly teeth], one of the main actors of the revolt against William the Conqueror, killed in the battle of Val-ès-Dunes (1047). His son, Robert Fitz Hamon, was successful in winning back the favours of the duke-king and obtains became the conquest the Count of Glamorgan. He plays an important role for Henry I Beauclerc and his daughter Mabille wife of Robert Fitzroy, (aka Robert of Caen, or Robert of Gloucester) illegitimate son of Henry I Beauclerc, bringing him the domains of Creully and Torigni in Normandy, Glamorgan and Gloucester in England. Richard I of Creully, son of Robert of Gloucester, made it his main residence around 1147.

In the 12th century, the residence of Lord Creully comprising a Great Hall of one single volume, vast, solid room rising to seventeen metres high, open like the nave of a church by four grand arcades on columns giving onto an aisle.  It was redeveloped from the 14th to 16th century, divided throughout its length and given a Renaissance façade. But traces of the Anglo-Norman hall are still visible in the south-east gable end (sealed bays, slanting roof plane).

A similar model can be found at the Château of Oakham (Count of Rutland).  These are the characteristic configurations of a residence where a Lord of high rank in the 12th century held his assemblies. The type is preserved, above all, in England on a dozen sites, but it is recognised in three other buildings in Normandy (Beaumont-le-Richard, Bricquebec, and Barneville-la-Bertran). The example of the Exchequer’s room of the Château of Caen, devoid of aisles, is another type of large hall. Adjacent to the Grand Hall, there is a long residential building constructed against the rampart along the valley. It included two levels divided into several rooms containing private apartments and the service quarters: the lower chamber of 12th century, entirely vaulted, has been preserved. There too, the traces of the sculpted decoration, still significant, display the rich seigniorial residence of a family solidly installed in Normandy and in England, and close to power.