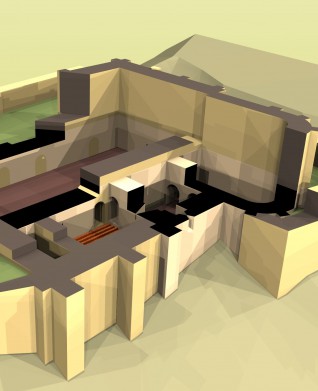 WHY IS IT IMPORTANT
The Tower of London and Colchester keep are inspired by the Tower of Ivry.
DID YOU KNOW?
The architect of the Château d'Ivry was assassinated on the order of the countess so that he could not reveal his secrets of construction.

The Château of Ivry shows the first appearance in Normandy of the model of the great quadrangular keeps from the period of Duke Richard II, around 990 /1010, almost half a century before the time of William the Conqueror. The Dukes Richard I (942-996) and Richard II (996-1026) depend on the members of their family, the ‘richardides’, who will become the adversaries of the young Duke William. In 1030, Robert the Magnificent removed Ivry from his cousin Hugh, bishop of Bayeux, and William ensures he keeps this important château on the boundary of the duchy.

The Château of Ivry is built on a barred spur of a moat the site of which commands the passage of the river Eure. It presents, to all appearances, the classical arrangements with a high outer wall and a courtyard whose chronology is not totally established. The major room is the great tower, prototype of the great Anglo-Norman keeps / residences.  The vestiges of the walls of this tower show ancient masonry, in fishbone forms (10th-11th centuries) and allow an impressive building to be reconstructed with an organisation presenting a ground level and a fine upper level. We recognise here the layouts of the Carolingians palaces (10th century): large stateroom, private apartments and chapel to protruding apse, that will be adapted to the reinforcement of the military functions for the construction of the Angevin great quadrangular keeps (from the end of the 10th century) and Anglo-Norman (11th-12th centuries).

The texts mention towers contemporary to those of Ivry, at Rouen or Bayeux, but the vestiges have not been preserved.  In reality the tower at Ivry had known several phases of successive adjustments which archaeologists are still debating.  But in the plan for the Tower of London and Colchester Keep striking similitudes can be seen in the monumental aspect and the presence of the chapel with a protruding apse.  It is possible that this type of plan was developed at Ivry, from the outset, or once the Duke had regained control of the Château, and in any case before the transposition of the model in England.