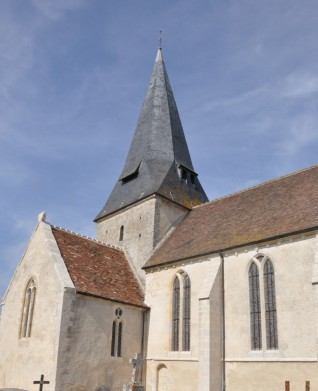 WHY IS IT IMPORTANT
It was built in the lifetime of William the Conqueror and shows an architecture typical of this period. Its painted mural decorations still give today an idea of the motifs that usually decorated the religious buildings of the XIIth century.

Located to the west of Falaise and built around 1050, the Church of Saint Anne de Norrey-en-Auge provides a beautiful example of primitive Romanesque architecture today. It is situated on the location of the foothills of the Auge region in the territory of the Grandmesnil family, who founded the Abbey of Saint-Evroult-en-Ouche. There, we can still see the stone-setting of the walls in fishbone form dating from 11th century.

The simplicity of the Romanesque style that we can observe in the nave is representative of the style that was exported for England in the wake of the Conquest. The exceptional character of this church also resides in the great number of painted walls from the 12th century, remarkably preserved (frescos, false-stones), as well as sculpted capitals featuring human masks, animals facing one another and reptile faces.