Church of the Trinity, Church of Saint Gervais - 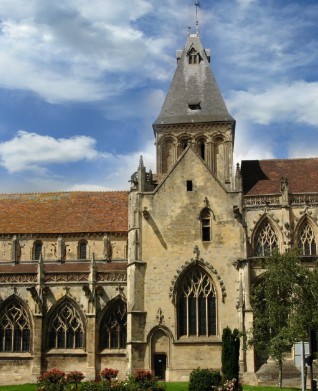 WHY IS IT IMPORTANT
These two churches are at the heart of the town's history. The first is witness to its foundation, and the second was founded during the reign of William I, consecrated by his third son, Henry I Beauclerc, Duke of Normandy and King of England.
DID YOU KNOW?
Certain capitals of the Church of the Trinity, carved at the end of the Middle Ages, show amazing scenes of daily life, picturesque and comic scenes.

These two churches, each located at opposing ends of the heart of the town, are witness both to the foundation of the city and its development in the Anglo-Norman era.  They were both consecrated by by Henri I Beauclerc, Duke of Normandy and King of England.

The Church of the Trinity, firstly, marks the location of the most ancient parish of Falaise and is situated at the foot of the château. It appeared during the formation of the first urbain core in the first half of the 9th century. It is at the beginning of the 12th century that the primitive church is replaced by a Romanesque building, to be consecrated by Henry I. Later, it was severely damaged by the troops of Philippe-Auguste during the siege of 1204, rebuilt in the new imported Gothic style and suffered further deteriorations during the Hundred Years War.

Finally, the Church of Saint Gervais was the first religious building begun under William the Conqueror at the end of the 11th century. It was completed at the beginning of the 12th century.  Henri Beauclerc consecrated it in 1134. In its Romanesque parts, openings inspired by the Abbey of the Trinity in Caen, can still be distinguished notably on the South wall, placed under the same patronage. In the same way as the Church of the Trinity, suffered deteriorations during the siege of 1204, then during the Hundred Years War and efforts at reconstructions each left their mark on the building. During the Renaissance, the choir, the ambulatory as well as the chapels, was rebuilt.