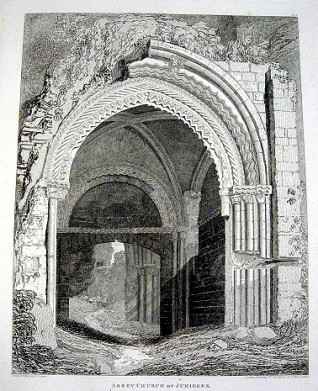 WHY IS IT IMPORTANT
The Abbey of Jumièges was the first abbey consecrated by William the Conqueror in 1067, on return from England. This ceremony was a grandiose manifestation of the Norman victory. Numerous English goods were distributed at Jumièges and the great Norman abbeys.
DID YOU KNOW?
The majestic ruins of Jumièges inspired English travellers such as John Sell Cotman who made a drawing of them published in 1820 in his "Architectural tour in Normandy".

Founded in the 7th century, Jumièges Abbey became a very prestigious abbey favoured by the Carolingian kings.  It was therefore the target of the Vikings who pillaged and burned it in 841. However, the history of the abbey also illustrates in a striking manner the success of the integration of the Normans in the Frankish Kingdom. In 942, the son of Rollon, the very Christian William Longsword (933-942) restore monastic life by sending for the monks of Poitiers.  The founder dukes of the Norman state, Richard I (942-996) and Richard II (996-1026), favour Jumièges and entrusts it to a disciple of the Italian reformer Guillaume de Volpiano, himself sent for at Fécamp. It is finally William the Conqueror who, in the following generation, will make of Jumièges a manifesto of Norman splendour.

Well located on the bends of the Seine downstream of Rouen, between London and Paris, Jumièges also had a strong relationship with England befor1066. Robert Champart, Abbot of Jumièges became Bishop of London in 1045 and, with the support of Edward the Confessor, returned from his exile at the court of the Duke of Normandy to become King of England in 1042.  This relationship explains the presence of important manuscripts influenced by the Anglo-Saxon miniature in the scriptorium at Jumièges.

The abbey has the distinctive feature of containing two churches of which the most ancient, Saint-Pierre, perhaps shows traces of walls destroyed by the Vikings and restored in 942. But Jumièges is above all known for the stately ruins of the Church of Notre-Dame begun in 1040, at the very beginning of the reign of William and consecrated in 1067. Of grandiose proportions, the Church of Notre-Dame is amongst the more important architectural buildings of the era of William of Normandy. It brings together the souvenir of imperial Carolingian architecture, revitalised in the Ottonian Germanic Empire, with the innovations of the Romanesque era, as many elements used in Norman architecture in England where they form in their turn an "imperial" programme specific to the Norman kings