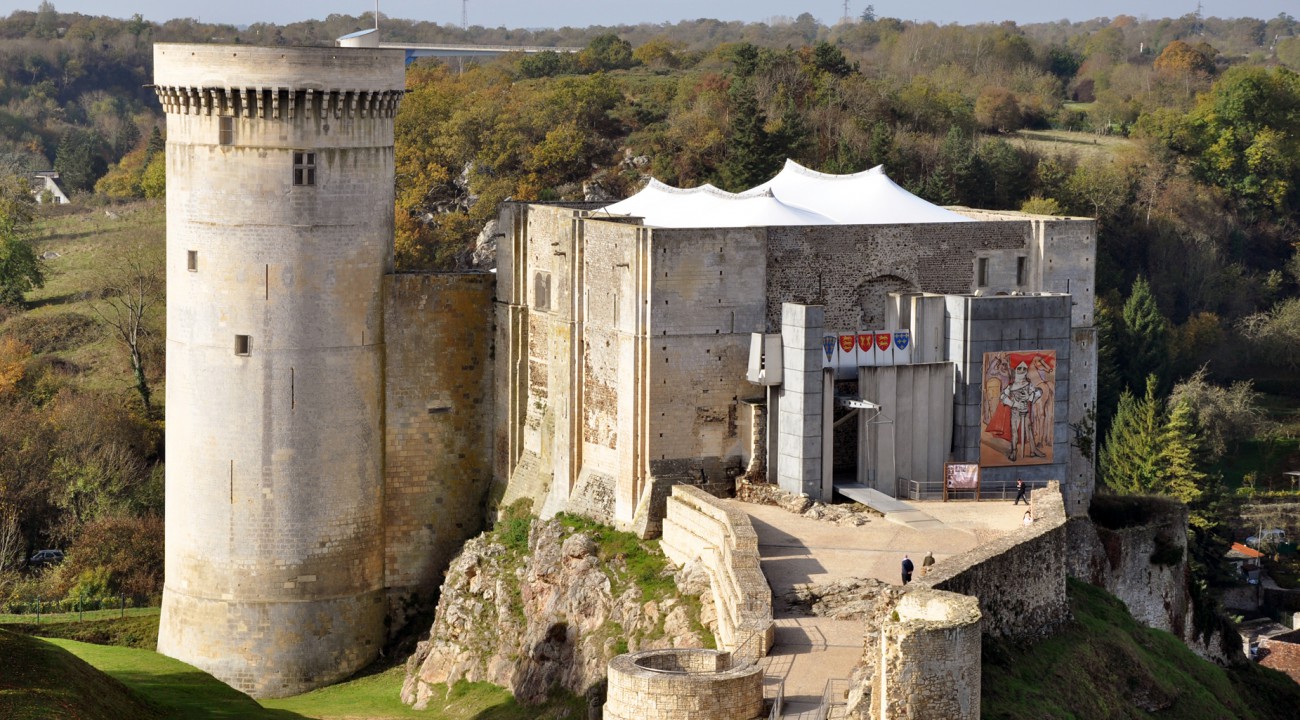 Today, more than a thousand years after its first walls were built, the castle of Falaise still boasts an exceptional set of fortifications with castle walls flanked by fifteen towers, a large outer courtyard, a fortified inner courtyard and three keeps. It was built in the city that witnessed the birth of William, the future conqueror and the events that followed – the Anglo-Norman epic, the advent of a new dynasty – all had a profound influence on its evolution.

The fortifications still standing are numerous but the most emblematic of all these buildings is probably the Great Keep, erected in 1123 by Henri I Beauclerc, William’s third son, who was king of England and duke of Normandy. It is the last Anglo-Norman keep from the 12th century that is still fully accessible in Normandy today. It is roughly 65 feet tall and is built atop a rocky outcrop that overlooks the Ante Valley. It gathered under its roof the many functionalities that were useful to a Norman lord. It could be used militarily as a refuge, with its windowless ground level and its thick walls, but also politically with its vast public hall for court sessions and banquets. On a daily basis, it could also accommodate a lord’s household inside its private quarters. Finally, a small private chapel enabled the residents to attend daily services without having to leave the building.

These different uses along with the subsequent interior layout can be found in many other keeps of the same period in Normandy (Caen) and England (Rochester, Colchester, Norwich). This type of great Norman tower that dotted the landscape both in the duchy of Normandy and the kingdom of England enabled the court to travel from castle to castle, moving in and out depending on the political or military needs of the moment. Later, a Lower Keep built by the Plantagenets was added to the Great Keep and effectively expanded the residential space. Shortly after, at the beginning of the 13th century, a great master tower, called Tour Talbot, was built when Normandy became French again, marking the beginning of a new era after the breakup of the Anglo-Norman empire. The purpose of this mighty tower was military. At a 115 feet, it is one of the finest examples of King Philip-Augustus’ architecture and offers a unique point of view on the city of Falaise.

The Castle is accessible today thanks to ambitious restoration campaigns that started in 1986 and aimed to repair identically the best known elements but also to recreate with modern building materials the lesser known parts. Concluding these several campaigns, a brand new museography is installed in April 2013 which enables the visitor to relive the adventures of the kings and dukes through augmented-reality recreations, specially commissioned 12th furniture, projections of animated characters, and archaeological objects on display.

William The Conqueror
DID YOU KNOW?
The keeps of Falaise are the last remaining Anglo-Norman keeps still accessible in Normandy today.